Welcome to our Spotlight on IR35 Client Hub

From April 2020, private sector businesses will need to comply with the reformed IR35 legislation when engaging with contract workforces. But these changes don't need to be intimidating with the right preparation. Find out more below.

IR35 is a tax legislation aimed at cracking down on 'disguised employment'. First introduced in April 2000, IR35 has been gaining significant traction with reforms first introduced to the public sector in April 2017, and in April 2020, it's being rolled out into the private sector.

These reforms have been introduced by HMRC as they estimate the cost of non-compliance to the existing rules could reach £1.2 billion per year by 2022/23. Previously the responsibility of determining has been with the individual worker, but now it is with you, the 'fee-payer'.

The risks of non-compliance include loss of talent, increased costs and even legal action from HMRC - so it is important you understand this legislation and prepare accordingly.

What can you do to prepare for IR35?

We want to keep this as simple as possible, so we've broken it down into  stages.

Many of our clients have found they do not have the time or the skills to internally to prepare for these reforms, so we have designed a number of customisable solutions to support you through this process. As a leading specialist recruitment consultancy and service provider, we witnessed first-hand the impact of IR35 reforms in the public sector. This, coupled with our technical knowledge in your sector, means we are well-positioned to support you through these reforms and beyond. 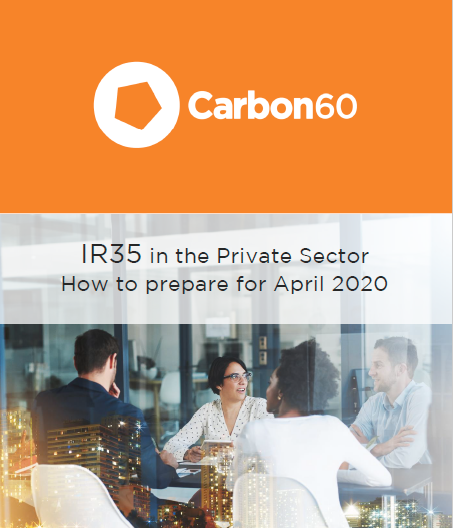 Find out more about IR35, what we learnt from the public sector, and 5 simple stages to prepare for the reform.

Three ways you need to be preparing for IR35

Could Statement of Work be the solution to IR35?

*This page provides information on legal issues and developments of interest to our colleagues, clients and candidates. The material is not a comprehensive treatment of the subject matter covered and is not intended to provide legal advice. Readers should seek specific legal advice before taking any action with respect to the matters discussed on this page.