Covid-19 brought lasting changes to the economy which touched just about every industry. Engineering is no exception and as we emerge post-pandemic, we’ve been watching engineering recruitment activity with added interest.

That’s why we’re pleased to bring you this 2022 Salary Survey and report, with a particular focus on Site Engineers and Project Managers in the Renewables sector. We’ve pulled together information from our database over the past six to twelve months to share market insights and uncover any trends.

If you’re an engineer in Renewables looking to compare your own salary, or an employer looking to benchmark current and future Renewables roles, this report is for you.

A positive outlook for Renewables Site Engineers and Project Managers

Firstly, let’s look at the number of roles available for Site Engineers and Project Managers in the Renewables sector.

For Project Managers, that percentage increase has been slightly lower, but still significant at around 70%. There have been no sizeable peaks for this group, but instead, a steady and gradual rise in the number of unique job ad postings month-on-month.

This suggests Site Engineers and Project Managers are in a strong position post-pandemic and likely reflects a period of recovery for industries requiring the support of engineering for their continued growth. Great news for engineering which appears to also be thriving.

When comparing the two specialisms with one another however, there is one that is head and shoulders above the other. The number of Renewables Site Engineer jobs per month has averaged 964 in the past twelve months, whereas for Project Managers, this figure stands at 7,078 live roles per month. 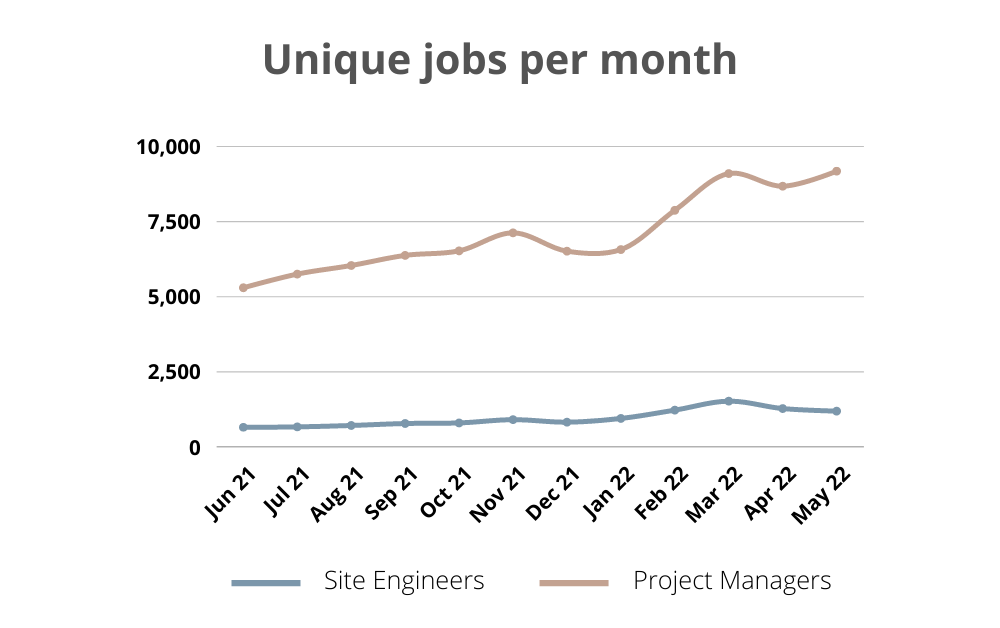 Looking at locations now, it’s perhaps anticipated that the highest number of live Renewables vacancies over the past year have been in and around London. 35% of all Site Engineer roles and 49% of Project Management roles advertised have been London-based.

Demand is still high in other areas of the UK though, with Northern Powerhouse scenes including Birmingham, Manchester and Leeds featuring highly on our list of top UK cities for Renewables. Scotland and specifically Glasgow and Edinburgh are also currently popular locations for Site Engineers and Project Managers with a Renewables focus.

At the other end of the scale, Reading is cited as the area with the fewest Site Engineer jobs per month and Liverpool for Project Managers. That said, we’ve still been recording average numbers of around 57 and 417 roles respectively per month for the past year. These are stats we’ll continue to measure with interest for the rest of 2022. 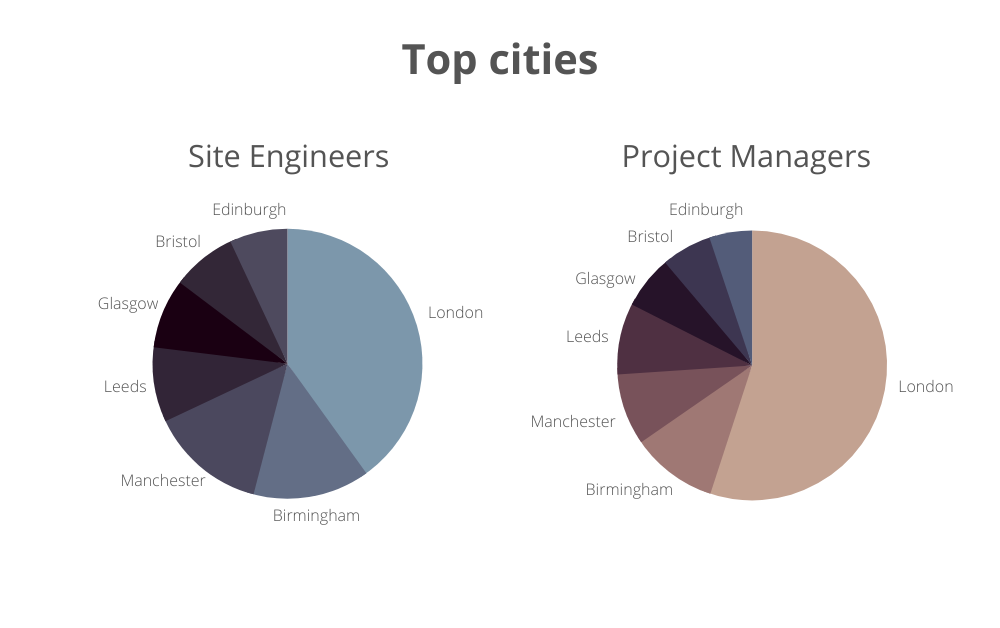 What skills are employers looking for in their Renewables engineering specialists? We were keen to understand what they are and whether there are similarities between the requirements for the two different roles.

Hard skills, as we may expect, differ between the two disciplines.

For Site Engineers, the most highly sought-after skill (36%) is Civil Engineering and for Project Managers, it’s perhaps unsurprisingly, Project Management (42%). Risk Management/Analysis and Construction feature on both lists but beyond that, the hard skillsets for each are quite different. Site Engineers are preferred to have experience in Subcontracting, AutoCAD, Earthworks and Health & Safety. Project Manager employees are looking for capabilities in Agile Methodology, Stakeholder Management, Finance and Change Management.

Planning, Problem Solving and Operations are also all amongst the most common soft skills included in job ads for both functions.

Currently our data shows that Renewables Project Managers’ wages have been consistent since late 2021, except for a small increase of around £2000 from February which has remained in place to date.

For Site Engineers in the Renewables space, wages have fluctuated more, experiencing a much sharper increase of £10,000 between December 2021 and February 2022, which has steadily decreased again by £4-5,000 as the year has progressed.

Currently our data shows that in the past six months Site Engineers in Renewables have on average been earning more than Project Managers. Project Managers’ wages have averaged £51,840 , however, this doesn’t account for performance bonuses which are often between 5 – 30%, bumping up this figure considerably. For Site Engineers the average has been £59,136. One thing to note is that this salary may not factor in costs of accommodation, food, transport etc. This does of course include the substantial spike seen in February which has bumped up the overall figures for Site Engineers.  These are further statistics we’ll be monitoring in the coming months to see whether this increase is a one-off occurrence or could indicate a longer term rise for Site Engineer professionals.

Keen to know more? As an end-to-end talent acquisition specialist, Carbon60 is supporting countless clients and candidates with advice on the latest market intel and industry best practice. Remember to get in touch if you’d like to discuss the findings of this survey or to better understand the latest developments in your specialist area of engineering.

How useful did you find this article?
Thank you for your feedback!
1.0 / 5.0
Back to blog listing
Share This:

Click here to see all of our available vacancies